• Uighurs are a Turkic ethnic group culturally and religiously associated with the region of Central and East Asia.

• Most of them are Muslims and they live predominantly in the northwest region, in the Xinjiang autonomous region of China and a small number of them live in the Central Asian Republic. 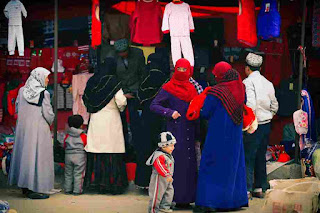 • Beside being rich in rich in oil and natural gas, it produces approximately 5 million tonnes of cotton annually.

• Xinjiang is also an important link in China's Belt and Road Initiative (BRI), a development plan connecting China to Europe.

• Xinjiang is an autonomous region which means it has a degree of sovereignty. It is independent in its actions and has a freedom from external authority.

• The Uighurs prefer to call it, "EAST TURKMENISTAN", however China has deprived them from practicing their basic rights and subjected them to restrictions particularly to keep itself dominant over the Uighurs.

• 16000 mosques have been demolished and some are concerted to Chinese museums.

• The Uighur women are sterilized (forbidden from having children) to control China's population.

• The Uighur women are being raped by Chinese officers.

• Uighurs are forced to drink alcohol, eat pork and perform other activities against their religion.

• Detention camps have been built where they are forcefully converted into factory labour and are preached anti-Islamic teachings.

• The Uighur women are not allowed to wear scarves and veils.

• The detainees in detention camps are subjected to food and sleep deprivation.

• China has turned down the charges of genocide inflicted on it.

• Its claims that the detention camps are education camps for Uighurs where they are given job shills and sent to different parts of countries for suitable jobs.

• However, the media refutes China's assertions and shows the tangible situation of the Uighurs.

What has been done for Uighurs so far?

• The UK, US and France have called out China in the United Nations (UN) for the Uyghur genocide, however, nothing has been done against China because of its status as a holder of veto power in the security council.

• Uighurs have also filed a plea in the International. Court of Justice (ICJ) to investigate into China's brutal acts but the it remained silent.

• However, the reason behind the discriminatory silence stays mysterious but China's funding worth millions of dollars speaks for itself.